May 24th is the celebration of St. Sara (the Egyptian) at the little town of Saints Maries-de-la-Mer on the coast of France. Legends about this dark saint differ, but one insists that she was pre-adolescent girl on the boat that brought Mary Jacobi, Mary Salome and Mary Magdalene, political refugees from Jerusalem, to France in AD 44. The oral tradition goes way back into forgotten origins, but the story has some very poignant hints about this little girl on the boat. Her name Sara means â€œprincessâ€ in Hebrew and she is said to have been the servant of her relativesâ€¦.. (just like Cinderellaâ€”another â€œsooty-facedâ€ princess,â€lostâ€ or “locked awayâ€ in our Western fairytale). In the little novella published as the Foreword to my â€œWoman with the Alabaster Jar,â€ I suggested that Sara was born in Egypt after the Crucifixion of Jesus and was the daughter of Mary Magdaleneâ€”who is proclaimed to have brought the â€œHoly Grailâ€ (sangraal)

to France. The Old French word â€œsangraalâ€ is misleading when it is divided after the â€œnâ€: san graal or â€œholy Grail.â€ When you divide the word after the gâ€”â€œsang realâ€â€”it means â€œblood royal.â€ One does not carry the â€œblood royalâ€ around in a jar with a lidâ€¦. it flows in the veins of a child of royal lineage, in this case, the daughter if the Davidic line of Israelâ€™s kings. An interesting prophecy occurs in the Hebrew Bible in the book of Lamentations: â€œThen princes of Judah, whose faces were once white as milk are now black as soot. They are not recognized in the streetsâ€ (Lam 4:7-8). The darkness of this little princess, born in Egypt, may be symbolic of her status as a dis-inherited exile of her native Israelâ€”obscure and hidden in the annals of Western history booksâ€¦.

Today the Gypsy procession in Stes. Maries-de-la-Mer will accompany Sara’s statue from the Church of Our Lady of the Sea to the Mediterranean beach, shouting as they go: “Vive Sainte Sara!” commemorating the story that says she is one of the boatload of Christians who brought the Gospel to Western Europe. The festival begins tonight in Stes. Maries with street dancing and gypsy concerts and culminates with the procession of the effigies of the two Maries (Marie Jacobi and Marie Salome) in their blue boat to the sea on the 25th. Various websites have photos of the festival and processionsâ€¦. very picturesque!

May 18th was the anniversary of the first 1980 eruption of Mount St. Helens, an event my friends and I considered hugely prophetic. I am a member of a small Roman Catholic prayer community â€œEmmanuelâ€ that has received incredible “revelation” over a period of yearsâ€”some of it outlined in my 1998 book, â€œThe Goddess in the Gospels,â€ relevant to our on-going efforts to reclaim the Bride and the Partnership (Sacred Union) at the heart of the Gospels. 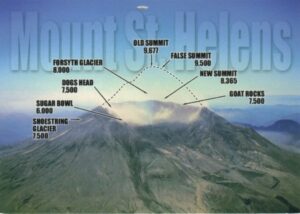 The mountain (named for a British explorer) bears the name of the Emperor Constantine’s mother Helena who prayed for decades for the conversion of her son to Christianity. It erupted on Pope John Paul IIâ€™s 60th birthday (May 18, 1980) and again, a much smaller eruption, on the following Sunday, May 25, the feast of Pentecost. The first eruption of the “fire mountain” caused incredible devastation. The lake that spilled its waters down into the coastland below was called “Spirit Lake.” I knew the place wellâ€”our family had spent a fishing vacation there in 1973. We had eaten our dinners in the lodge owned by Mr. Trumanâ€”dinners cooked by his wife.

For these reasons, on noticing these dates, I immediately associated the volcano with the Institutional Roman Catholic Church. The Scripture passage I received when I prayed over the volcano’s eruption was from the prophetic book of Jeremiah:

“Beware. I am against you, destroying mountain. I will stretch forth my hand against you, roll you down over the cliffs and make of you a burnt mountain.” (Jer. 51:25). Reading this passage, I was horrified! I was convinced that God was talking about the Church in its present condition. At the time I had never even heard of pedophilia, but I knew about the Vatican Bank scandal and other abuses of power.

Several months later another explosion of Mount St Helen’s occurred, this one on 22 July–the Feast of Mary Magdalene–which in that year fell on the â€œ9th of Av,â€ the day when Jews in Israel go to the Western Wall to mourn the destruction of their Templeâ€”not once, but twice! One of my prayer group â€œkinswomen,â€ who lived in Tel Aviv at the time, planned to go to the Wailing Wall in Jerusalem on that day in 1980 and had asked our prayer group to be with her in prayer mourning for the Temple that has not been rebuilt. We had each performed a â€œnovenaâ€ in preparation for this event in solidarity with those who mourn the Temple.

The “synchronicities” and connections of these dates on Mount St. Helensâ€™ eruptions were, I believe, enormously prophetic. At the time, my prayer group friends and I had been shown to record dates of important current events and interpret them with a view to the Church calendar of feast days. We all thought that the implied implosion of the Church (Mt. St. Helens) Â had to do with the Vatican bank scandals and the cover up of the rumored murder of John Paul I (a ‘story rarely told’). We had as yet no idea of the other devastating internal problems brewing in the Church that included the massive cover-ups of pedophilia.

Here’s what the Mount St. Helens Volcano revealed when we prayed about it:

A damaging implosion would come from within the ChurchIt would occur during the “watch” of John Paul IIIt would cause an the waters of the Holy Spirit to be pouredÂ out into the earth (Pentecost, Spirit Lake poured out). The Church was no longer to be the â€œcustodianâ€ of the â€œwaters of Spirit and Truth.”The denial Jesus was â€œtrue manâ€ would be an issue. (Mr. â€œTrumanâ€ had stayed on the mountain and was buried in the slide).Â He had refused to leave because his WIFE was buried at the site of his fishing camp).The “Templeâ€ in Jerusalem could not be rebuilt because of the loss of the â€œBlueprint,â€ including the denial of â€œMary Magdalene” and all she embodies: the â€œSacred Feminine,â€ the â€œBride,” the physical body, relatedness to the earth, kinship of all people, feminine wisdom, intuition.Â The model of â€œSacred Union” was broken in the cradle of the Christianity–waiting to be restored!

The â€œrevelationâ€ of Mt. St. Helens is discussed more thoroughly in chapter 3 of my book, The Goddess in the Gospels: Â http://www.margaretstarbird.net/the_goddess_in_the_gospels.

The systematic denial of the Feminine as â€œBride and Belovedâ€ is a core problem underlying the sex and power abuses by priestsâ€”a devastating â€œdesign flawâ€ of the early Church perpetrated into the present with tragic consequences.

Last night at BibleTV I saw an interesting sermon of famous US-preacher Bayless Conley. At the beginning he spoke of the Holy Spirit (we call Mother Ruah / Ruach). One of Her most important symbols has been oil, especially oil of anointing and oil for lamps! This special assignment seems to be an indication for the connection between Mother Ruah and Mary Magdalene. For oil of anointing brings to mind Mary Magdalene appearing as Sulamith in Song of Solomon / Song of Songs. Oil for lamps of course has to do with light – and Mary Magdalene is the Pure of Light in the Pistis Sophia and the Illuminated in the Gnosis. William Henry in one of his books calls Her in his subtitle “Illuminator. The woman who enlighted Christ”. In the Revelation 12, Mary Magdalene appears as The Woman clothed with the Sun.
We now can understand better why Hippolyte of Rome (170-236) in his Commentary on the Song of Songs associates Mary Magdalene with Ruah, particularly here:
On Song of Songs 4:1f.: “Look, my friend, my lovely, your are beautiful, your eyes are like doves.” The bridegroom calls this out to Sulamith, in Hippolyte’s opinion, because he has seen the Holy Spirit (Mother Ruah). So Sulamith is associated with Ruah. Writing about the Song of Songs 3:1-4 Hippolyte identifies Sulamith with Mary Magdalene, calls Her “Apostle” and “New Eve”. Commenting on the women going to the tomb of Christ he writes: “Oh, the new instruction, Eve becomes Apostle!”

Mary Magdalene and the Force

Thank you for posting this, Klaus. The connection between Mary Magdalene as â€œointment bearerâ€ (Myrrhophore) and the Bride in the Songs of Songs [Solomon] is of immense importance! In the Song of Songs / Solomon, the fragrance of the bride wafts around the king at the banqueting table. In John 12, her fragrance â€œfilled the house.â€ In both case the fragrance is â€œnard.â€ The only passages in all of the Judeo-Christian scriptures where â€œnardâ€ is mentioned are the Song of Songs and the anointing of Jesus in all four Gospels by â€œthe woman with the alabaster jar.â€â€”

Here are several quotes referencing the â€œoilsâ€ or â€œfragranceâ€ of the bride:

While the king was on his couch, my nard gave
forth its fragrance. (Song of Solomon 1:12)

Mary took a pound of costly perfume made of
pure nard and anointed Jesus’ feet and wiped
them with her hair. (John 12:3a)

How sweet is your love, my sister, my bride.
How much better…is the fragrance of your oils
than any spice! (Song of Solomon 4:10)

The house was filled with the fragrance of the perfume…
and Jesus said, “Leave her alone so that she might
keep it for the day of my burial. (John 12 3b, 7)

The only anointing of Jesus during his ministry was by the woman whom Luke calls a sinner, but John names: She is Mary, the sister of Lazarus. As I pointed out recently on this list, the â€œVesica Piscesâ€ associated by gematria (153) with Mary Magdaleneâ€™s title is used as a symbol for the â€œanointing by the Holy Spiritâ€ in Christian artâ€”

Hereâ€™s what I posted a week or two ago: “Often when you see a medieval sculpture of Christ seated in glory, he is surrounded by the â€œvesica piscisâ€ () symbol (the yoni) which is universally associated with the goddesses of love and fertility. In Christianity, the meaning of the () is â€œanointed by the Holy Spiritâ€â€”acknowledging that She is feminineâ€¦.

In the Gospels themselves, Jesus is anointed by a woman named twice in Johnâ€™s Gospel (11:2 and 12:3). She is Mary, the sister of Lazarus, associated in Christian art and tradition (until recently!) with the Mary whose title is â€œthe Magdalene,â€ the one who cries at Jesusâ€™ tomb and meets him resurrected in the Garden on Easter morning.â€

This association of the â€œanointingâ€ with the â€œBrideâ€ derives from the rituals of fertility cults of the ancient Near East where the bridegroom was anointed by his â€œBrideâ€ as a prefiguring symbolic of the anointing of the male by the female during coitus. The â€œvesica piscisâ€ symbol is equated universally with the yoni. Greeks called the symbol the â€œMatrix,â€ the â€œwomb,â€ the â€œdoorway to lifeâ€ and the â€œHoly of Holiesâ€ – literally the â€œbridal chamber.â€ So the use of the vesica piscis in Christian art is a â€œcarry-overâ€ from the ancient rites of heiros gamosâ€”the marriage of the Sacred King and his Holy Bride, who is the representative of the Goddess of the land and people.

Mary Magdalene is clearly cast in the role of the Bride in the Gospelsâ€”clearly the instrument of the Holy Spirit anointing the King in advance for his death and burial.

In memory of her,
Margaret
www.margaretstarbird.net
â€œThe Woman with the Alabaster Jar”