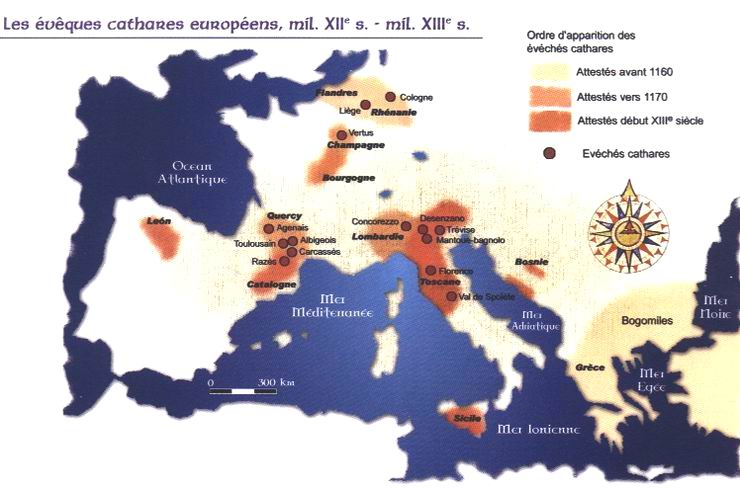 A recent claimÂ saysÂ theÂ Cathar heretics never existed. You may have heard of them, the Cathars wereÂ persecuted (hunted, burned)Â by the Roman Church in the Dark Ages and had to go underground. Margaret Starbird nicely refutes the claim they never existed (see below).Â  I love her take on it, especially the way she likened the Cathar heretics to the Tea Party “heretics” today!

The Cathars — or â€œPurist Christiansâ€ –Â did indeed exist. Over 200 of them were burned alive at Montsegur, France in 1244. So uh yeah, I think they existed. The historical record agrees. See Cathars.Â  The cool mapÂ above shows their location and dioceses.

Why The Cathars Never Existed, an interview with Dr. Pegg

The Cathars are known as the greatest heresy of the Middle Ages, perhaps in all of western culture. Yet new scholarship reveals that the Cathars never existed. They were a fabrication and projection of both heresy hunters and romance hunters. We deeply understand one of the greatest historical mistakes in all times, as well as how it forces much of medieval history to be completely rewritten, including that of Christianity…and Gnosticism and Occultism as well.

I listened to this entire interview with Dr. Pegg posted on YouTube. I agree with his assessment that â€œCatharismâ€ did not exist as an organized religion (with central leadership, foundational documents and doctrines) in the 12-13th centuries. What DID exist were numerous groups of people (like St. Francis of Assisi) who used the Gospels (translated into their own Old French dialect, the Langue doc), to interpret the presence and teachings of Jesus in ways that challenged the rigid hegemony of the Roman Catholic hierarchy. The German word for â€œheresyâ€ is â€œKetzerei,â€ which is suggested a possible source for the word â€œCatariâ€ (Cathars). But the Latin root (â€œcatharâ€) means â€œpure.â€ Apparently medieval heretics claimed that their faith was â€œpurerâ€ than that of Rome. St. Bernard of Clarivaux was sent to examine the heretics of southern France and proclaimed that no teachings were more Christian than theirs. My own belief is that these â€œhereticsâ€ (now called â€œAlbigensianâ€ — the general region where they livedâ€”or â€œCatharsâ€) were actually Christians who embraced the Gospel of John with its radical message the Christ was present in their daily lives and â€œwalk with the Spirit.â€Â Â  Researchers have always known that the medieval â€œCathars” didnâ€™t leave charters and documents. They were living and preaching a â€œlife in the Spiritâ€â€”not creating a formal religion.

Also permeating the underground faith of the region was the â€œgreat secretâ€ the Jesus and Mary Magdalene were â€œBelovedsâ€â€”attested in a History of the Albigensians written in 1213 by Pier vaux-de-Cerrnay. I have visited the church in Beziers where the â€œCathars” and other villagers who sought sanctuary were burned to death when the church was torched on Mary Magdaleneâ€™s feast day, 22 July, 1209. Pier Vaux-de-Cernay, a chronicler who wrote about the event in 1213 said that it was Divine Providence to punish the Cathars on that day for their slanderous belief that Mary Magdalene and Jesus were lovers. Other medieval documents assert the â€œCathar” belief that Jesus and Mary Magdalene were husband and wife, and apparently this is one of the reasons the Roman Catholic Church was so eager to suppress them. Of course the annals of the Inquisition would not record this belief of the heretics; why would they want to perpetuate the heresy they are trying to squelch?

As discussed in two of my books, â€œThe Woman with the Alabaster Jarâ€ and â€œMary Magdalene, Bride in Exile,â€ the art and artifacts of medieval Europe retain evidence for the heresy of the â€œSacred Partnershipâ€ of Jesus and Mary Magdalene. Dr. Pegg may well be correct in his view that â€œCatharismâ€ never existed as an organized religion, but the fact that P. aux-de-Cernay’s â€œHistory of the Albigensiansâ€ was written in 1213 would prove that the heresies of Provence were virulent and brutally suppressed by the Church of Rome. Those heresies were an anti-clerical â€œgrass rootsâ€ movement that grew out of the Gospels themselvesâ€”encouraged by wandering preachers. In a way they are like the modern â€œTea Partyâ€ movementâ€” a group of like-minded citizens unite in the belief that the central government in DC (like the Roman Church of the 12th -13c) is hopelessly corrupt and is distorting their “foundation documents” and teachings (the Constitution of the USA today, the Gospels in medieval Europe). The â€œhereticsâ€ in both cases are only loosely connected by certain core beliefsâ€”not in any formal, institutional sense.

I was amused that Dr. Pegg mentioned [the book] The DaVinci Code, since Dan Brown, a novelist writing fiction, borrowed his ideas from Holy Blood, Holy Grail, and from two my books (which he mentioned in DVC). I would have liked for De. Pegg to have commented on the massacre at Beziers in 1209 and on the siege at Montsegur and burning of 200+ heretics there in 1244â€¦ are they not history and incontrovertible proof that â€œCatharsâ€ existed and were persecuted into near extinction?

Peace and light,
Margaret
www.margaretstarbird.net
The Woman with the Alabaster Jar