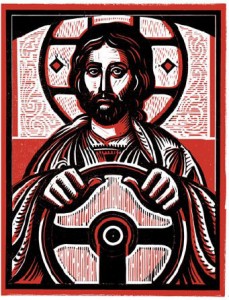 It’s Palm Sunday and here at our House Church we were just discussing Jesus / Yeshua’s choice of a donkey for his vehicle on the first Palm Sunday.

Okay yes, he was fulfilling a prophecy and there are many layers of esoteric meaning there, but why didn’t he ride in on a beautiful, noble horse? Why a work-animal, a funny-looking donkey?

Horses in Jesus’ time were like tanks today. They were used by military and marauders and very few ordinary people owned a horse. Horse hooves coming into town often meant burning and destruction of the village. Wealthy aristocrats sometimes rode horses too back then, but not that often. They usually rode in litters, were carried in chairs, and some had coaches of a sort.

Donkeys were the vehicle of choice for the everyday person and were the equivalent of today’s pick-up trucks. I once heard a sermon on Palm Sunday where the minister said a small donkey might have been seen as a VW Beetle Bug “Peace-Mobile”. Â I like that image, too.

Whether a VW bug or pick-up truck, Jesus chose his vehicle to show he was an ordinary person, not a militant, not an invader, not a wealthy aristocrat. He didn’t arrive on a mighty steed like a tank rolling in. He fulfilled a prophecy from the Hebrew Bible (Old Testament), and he also showed the people he was an everyday man, he was one of us. At the very end of the book of Revelation (which is also the end of the Bible and explains the end of days) Jesus rides in on a white horse — Carrying a sword. Those end-time symbolisms are very different. He came the first time as a peacemaker and will return to kick butt and take names. 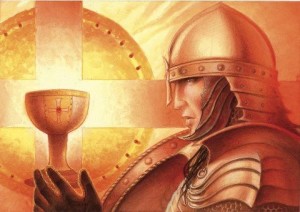 I’ve told you before, Margaret Starbird has been one of my most powerful influences, and I consider her one of my spiritual teachers ever since I met her in 1999. That was the same Â time our Mystery School with its Order of Mary Magdala was going online. I had read her seminal work, The Woman With the Alabaster Jar: Mary Magdalen & the Holy Grail in 1993 when it was first published, so in a way she became my spiritual teacher even before I started following her around the country attending workshops.

Our Esoteric Mystery SchoolÂ study programs useÂ her inspiring books about “the Goddess” hidden in the New Testament, aka Mary Magdalene.

Margaret posted the following yesterday to our GoddessChristians forum.Â Margaret responds to this short quote about the Holy Grail never existing:

Speaking of the Holy Grail –“its religious significance didn’t ariseÂ until medieval legends entwined ancient Celtic myths with the ChristianÂ tradition of the Holy Chalice used by Jesus at the Last Supper.
“The Grail legend is a literary invention of the 12th centuryÂ with no historical basis,” Carlos de Ayala, a medieval historian at aÂ Madrid university, told the AFP news agency. “You cannot search forÂ something that does not exist.”

***************************
Margaret Starbird writes: As some of you already know, I don’t believe that the “Holy Grail”–Â “sangraal” in Old French — was “the Holy Chalice used by Jesus at theÂ Last Supper.” Describe it another way as “the vessel that once containedÂ the blood of Christ.” Now, rather than a cup of gold or silver, you haveÂ the hint of an “earthen vessel” — in fact, a woman, bearing a child of whomÂ Christ is the father. If you divide “sangraal” before the “g”– you have
“San graal” — encountered in the “Grail” stories about a “cup” or “chalice.”Â But if the same word is divided after the “g” — “sang raal,” it meansÂ “Blood royal” in Old French. You don’t carry the “blood royal” in a jarÂ with a lid!

In medieval legend, Joseph of Arimathea is almost always the “custodianÂ of the Grail” — sometimes shown in medieval paintings holding a chaliceÂ under the wound in Christ’s side as he hung on the cross. But there are also medieval paintings that show Mary Magdalene holding the chalice to catchÂ blood dripping from the wounds of Christ, so both Mary Magdalene andÂ Joseph of Arimathea are associated with the “Grail” myth. My own petÂ theory is found in the 20-page fictional Prologue of my Woman with theÂ Alabaster Jar, called “Miriam in the Garden” (published in 1993 — the bookÂ that launched Dan Brown’s research for The DaVinci Code). 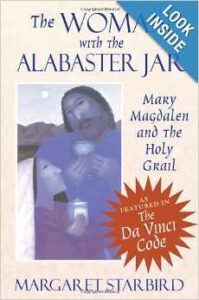 Realizing that Mary Magdalene is nowhere to be found in the Book of Acts,Â despite her prominence at the cross and tomb in all four Gospels, I askedÂ myself, “Why did she disappear so completely?” The only logical answerÂ I could imagine was that she was perceived to be in danger and taken to aÂ place of safety when rumors of the Risen Christ began to circulate in Jerusalem. This scenario would have been extremely likely if she had childrenÂ or was pregnant….making her “the vessel that once contained the bloodÂ of Christ.” You don’t carry the royal blood around in a jar with a lid…

Please check out these articles posted on my website about the “Grail”Â in Leonardo’s “Last Supper” — Â and the webpages about my books Alabaster JarÂ and Bride in ExileÂ if you haven’t already!

In memory of Her,
Margaret

Attention devotees of the Divine Feminine, aka God-ess. Â She is Returning today! April 3rd is an ancient holiday marking the ascension from “hell” of Persephone. Â Like Jesus Christ, she descended into Hell, but she did it every year in Fall with the “death” of the growing season. Â Then on April 3rd, she is “resurrected” and ascends to rejoin her mother, the Earth who has been mourning for her and refusing to produce all winter. This ancient holy day is part of the Spring Equinox season which begins nowadays on March 20 and goes to the 3rd.

This painting by famed Goddess artist Jonathan Earl Bowser used to be called simply the Return, but now itâ€™s called the Awakening. Â I like Â both titles since the latter implies a spiritual awakening alongside the physical â€œawakeningâ€ of the fertile mother earth. Look for the hidden symbols in the painting, such as the DNA spiral, the astrological symbol for the earth (circle with a dot inside). Persephone is treading on water, on lily pads where lotus flowers will soon grow.

This is also the first picture in my God Has a Wife online slide show.

Below is a list of other esoteric alternative holy days for this first week of April. Â Buddhaâ€™s birthday comes this week, also.

And be ready for the Goddess of Fate day on the 5th. “May Fortuna Smile Upon You!” was the ancient Greek and later Roman greeting today (and all week). Â If you were an ordained priest or priestess of God-the-Mother you would greet everyone thusly, generating the response, “And upon you!”