May 23 is when the little town of Les Saintes-Maries-de-la-Mer begins to celebrate the festival of St. Sarah the Egyptian and the three Maries… (Mary Magdalene, Mary Jacobi and Mary SalomÃ©) who allegedly arrived on the shore in “a boat with no oars” in c.AD 42…. apparently (according to French legend) bringing with them the Holy Grail and the “good news” of Christianity in their hearts (though it had yet to be written!)

The townspeople escort St. Sarah’s statue, dressed in seven layers of beautiful gowns created by tribes of Gypsy women, to the sea. Gypsy men on white horses carry the statue on a platform and stand in the waves while the crowd signs hymns and shouts “Vive Ste Sarah!”–

There are several suggestions as to why Sarah is black: she is “Egyptian” (i.e. born in Egypt), she is obscure (allegedly the maid-servant of the Maries, “just like Cinderella”) or, the one I consider most probably, she is a “hidden” offspring of the lineage of King David, whose heirs, “once white as milk, are now black as soot. They are not recognized in the streets” (Lamentations 4:7-8)… The bearers of that royal line are now political refugees in a foreign land…hoping to evade notice of the Romans who might seek to destroy them (as they did other relatives of Jesus in the first century). There is only one child on the boat in the French legends–and her name “Sarah” means “princess” in Hebrew.

Who do we say she is?

Professor Mary Ann Beavis posted in with this intriguing connection:

I then asked Margaret what legend is it where we see the little princess Sarah in the boat with no oars. 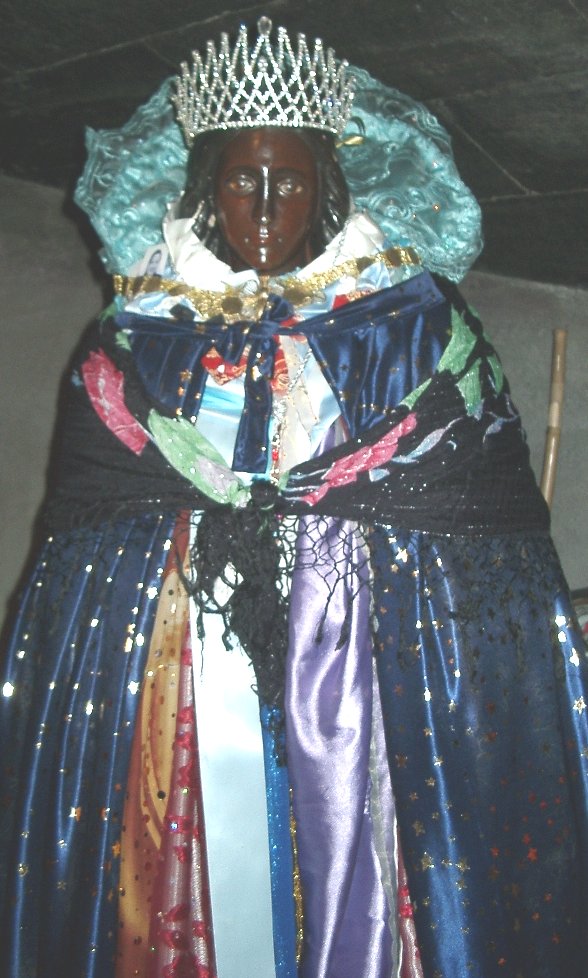 The legends about St. Sarah stem from an long-standing oral tradition and have several variations. They were not available in any extant written form until after the Inquisition was securely entrenched in Southern France, so our chances of hearing the complete and unabridged story of St. Sarah are slim and none. Jacobus Voragine’s Golden Legend names “Marcelle” as the servant of Martha (Mary Magdalene’s sister), who travelled with the other refugees from Jerusalem in the boat with no oars. But at St. Maries de la Mer, this “serving girl” is called “St. Sarah”–based on legends apparently indigenous to the area. One late version of the story says that Sarah the Egyptian (also called Sarah the Black) was an gypsy queen who welcomed the refugees to France when they arrived, but since the gypsies themselves didn’t show up in Europe until the 14th century, that account can’t be the true version.

Wikipedia has a piece on St. Sarah here.

And here is the Golden Legend section on the topic.

and this blog entry called Celebrating with Saint Sarah has interesting info: 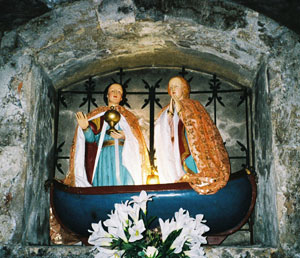 Here’s my story (longer version is published in my “Goddess in the Gospels.” While my husband was the district engineer in Nashville, TN, we were invited to go out dinner with a group French mayors and their wives who were visiting. At the time, I was totally immersed in “Grail” research and found myself sitting next to a French woman who was the wife of one of the deputy mayors. I asked her about the early Christians on the shores of France and she lit up like a torch…. she had been to all the shrines of the Black Madonnas and to St. Maries de la Mer and knew all the “lore.” She told me about St. Sarah, and when I asked who she was, Madame Capolla told me that Sarah was “the little girl on the boat” with Mary Magdalene and Martha and Lazarus and the others who came from Jerusalem. When I got home I looked up “Sarah” in my concordance and discovered that it means “Princess.”

Madame C. later mailed me several pamphlets and booklets from the shrines and Stes Maries, including pictures of St. Sarah dressed in her beautiful organdy and brocade dresses (piled on top of one another). The parallels with Cinderella (another princess from a far away land who is alleged to be the servant of her relatives) are obvious, along with the quote I provided from Lamentations about theÂ faces of the heirs of King David, “now black as soot.”—

I personally think this story was so dangerous in the Middle Ages that it was couched in symbolism and told as a myth or legend. The “fossil” left for evidence is the title “Sarah” (princess) given to the child/servant (whom Voragine names “Marcelle”–but then, Voragine was a Roman Catholic bishop, so perhaps he was providing deliberate misinformation in his Magdalene story (most of which reads like pure fiction anyhow!).

peace and light,
Margaret
“The Woman with the Alabaster Jar”
www.margaretstarbird.net

Mary posted:
>….My research has told me that The Mothers of Arles Festival is held on the 24th ( from Juno Covella and The White Goddess) or this
> festival is celebrated from May 24-28th (The Grandmother of Time, Z. Budapest). I am curious to know how the 23rd of May fits in?
> Did you get this date from another text or have you visited Arles to see it taking place today?

I have been to Les Saintes-Maries-da-la-Mer for the festival of Saint
Sarah and the “Maries” —which begins on the evening of the 23rd of
May with music and street dancing. Gypsies and tourists flock to the
town to celebrate the “vigil” of the festival. The 24th (today) is the
actual feast of St. Sarah, whose statue is kept in the crypt of the
basilica. A local bishop says high Mass in the basilica (“Our Lady of
the Sea”) in her honor, and then Sarah’s statue, bedecked in fabulous
finery, is taken from the church and escorted to the sea. Tomorrow (25
May) is the feast of the “Maries.” Their replica of two women with
covered chalices standing in a blue boat is lowered from it’s position
above the altar and is escorted to the sea, similar to the Sarah
parade and ceremony on the 24th. I’m not sure how this folk festival
ties in with other ancient “Goddess” celebrations, but I wouldn’t be
surprised if it did! Syncretism of ancient goddesses of love and
fertility abounds in the region: Isis, Juno, Cybele, Venus, Diana et alia.

Hereâ€™s the link to Jehovah Unmasked: The True Identity of the Bible-God Revealed. Â Such an eye-opener: describes the Key of Gnosis that Jesus came to give us, solves the Problem of Evil, shows the role of women in the early church as priests and bishops, Magdalene as Yeshua’s spouse and teaching partner, Sophia in the Old Testament, is a primer on REAL gnosticism, not that world-loathing flesh-hating gnosticism you have read about. Â

Jehovah Unmasked’s main premise is that the nasty, vengeful people-killing god in the Old Testament, “Jehovah” is not the loving God-the-Father Jesus came from. He is really Satan and/or the Demiurge especially when he sends “lying spirits of God to deceive the people” thru his prophets, and so forth. Â Half the time the Old Testament god is really Satan or Ialdobaoth, not the benevolent non-violent God who is All-Mother Sophia’s other half. Jesus himself told us this world is ruled by the Prince of Darkness and remember that’s why Satan had the “authority” to test Jesus and try to break him down — because Jesus had come to Satan’s turf to try to rescue (“save”) us. More about the good god and bad god all confused with one another at the link above. (Yes, it IS dualism, but it’s a good read and I like it, so there).

A verse the author quotes about everything making sense when we realize which I like:
â€œI am now at Home, spiritually, though I remain a pilgrim and a stranger in this world.â€ (Hebrews 11:13)

Here is a short excerpt from the chapter entitled, GOD THE MOTHER

The Gnostic Christians took both God the Mother and God the Father into their hearts, and knew the fullness of Health or “Soteria,” and so should you. Translating “Soteria” as “salvation” usually obscures the real meaning, which is Health. Â See Strong’s Greek Lexicon #4991. Â “For the Jerusalem Above is free, and She is our Mother.” Â Galations 4:26. Â
….

Its quite plain these “church fathers” were full of themselves and … had real power and used it to suppress all feminine descriptions of the Divine as well as to suppress women in general. Â … This quote from the so-called “father of the Latin Church,” Tertullian (155-230 A.D.), serves as an example: Â “These heretical females! How uppity they are! Lacking any modesty they’re audacious enough to heal the sick, debate, catechize, exorcize and possibly even baptize!” (From “On Prescription Against Heretics“)Â

There is a lot of info in this book like that and all so nicely presented, easy to read, I flew thru the book and I am a very busy woman. Hah. Jehovah Unmasked is only $15.24 at Amazon here and you can read inside the book. Â The Table of Contents with its chapter titles is interesting in itself. Â Â

…Just call me one of those audacious heretic females. Â Sheesh.

Scott Hutton over at the GoddessChristians forum last week posted these interesting observations about the red egg, skull and Magdalene.
I read – whether in his forum or one of his books I can’t say – a most fecund
sharing of Tau Malachi, to wit:

The red egg and the skull that are so often associated with the Magdalene?
Without interfering with the other attributes out there, he suggests: the red
egg points to the first chakra, where in most of us lies the sleeping kundalini
princess will awaken; the skull points one not to death but to the seventh
chakra, where dwells the Awakener. The mystic marriage of these two occurs, of
course, in the fourth chakra, the sacred bridal chamber where the two combine.

I merely share the jotting. I have little to say about it, except to note the
thinking on it leads one to some sublime perceptions indeed. As I’ve been
wearing the Magdalene mysteries medal for some weeks, I am often reminded of
these symbols. Synchronistically, to my immediate right at my computer keyboard
for several years has been a crystal skull (full of rainbows) and a blood red
egg shaped naga eye crystal from Thailand. For at least two years I’ve been
wondering what on earth they’re doing there, and why did it seem so in
appropriate to move them.

I tell you, if we just give it half a chance, life can be grand.

* * * * * * * * *
Katia here: Â I have been contemplating this chakra connection to the symbols of the egg and skull. The Sacred Marriage and the Bridal Chamber sacrament of Gnosticism are so intriguing. The Gospel of Philip is a good place to see the Gnostic sacraments explained. Â Explained is too strong a word… the sacraments are pointed to, hinted at, and in some cases symbolically explained in the Gospel of Philip. Â The Bridal Chamber is the ultimate Sacrament in Gnosticism and I sure wish I fully understood it… <grin> Â
I like the idea of the marriage of mind and body, head and heart.
The skull representing Awakening and the Awakener is very satisfying. Â Not sure about the red egg and sexuality… gotta think about that one. Â Hee hee.
Katia