Margaret Starbird wrote yesterday: My Highland friends Theresa and Barrie Dunford just sent me this link to their webpage about the “Marriage Window” in the Kilmore Church in Dervaig, on the Isle of Mull (Scotland):Â  http://sacredconnections.co.uk/â€¦/stained-glass-window-mystâ€¦/ Â The page includes information about the artist, Stephan Adam and his connections with the 19th c. “Pre-Raphealite” circle (DG Rosetti, Sir EB Jones, et alia), whose many depictions of the Grail Maiden are so wonderful!

Legend places Mary Magdalene in France after AD 42, but she disappears from the Christian narrative sometime between Easter morning and the beginning of the Book of Acts. One of the questions we must ask is WHY? The mother of Jesus and the apostles all reappear in Actsâ€”but Mary Magdalene, Joseph of Arimathea, not to mention Lazarus and Martha, all disappear abruptly and are noticeably absent in the Book of the Acts of the Apostles. Â St. Paul never mentions any of them in his epistles either.

In 1988 I wrote the short fictional â€œnovellaâ€ that was later published as the â€œPrologueâ€ in â€œThe Woman with the Alabaster Jarâ€ (1993). The story show how we might have lost all information about Mary Magdalene following the proclamation of the Resurrection. If Mary Magdalene was the wife of Jesus and pregnant with his child (or even possibly pregnantâ€”or already a mother), protecting her from the Roman and/or Jewish authorities would have been a top priority of the friends and followers of Jesus. Legend insists that Joseph of Arimathea was the â€œcustodian of the Grailâ€â€”the vessel that â€œonce contained the blood of Christ.â€â€”
In 1995 Susan Methvin, Ph.D. a college English professor in Alabama, sent me a poem she had written in response to reading my book:

“Imagine the Grail if you can, not as a gold cup
nor as one silver, embossed with grapes and vines,
but imagine the grail as the cup of her body,
that rocking place beneath her breast, the deep pear-shaped sac.
Her stomach rounded skin stretched into spun silk,
fills with the fruited seed of their making love.
The unborn child sways in this dark grail as her mother rides
across the searing desert. Â Magdalen’s only songs . .
steady breath, heart’s beat, dry sob.
In the heat, sometimes Magdalen
mouths His name, and the child takes form
blessed beneath the name of Jesus.”

A few years later Susan died, a victim of breast cancer. Â You can visit a blog commemorating her here: Â  http://www.susanmethvin.blogspot.com/
These days following Easter are an anniversary of the trek of Mary Magdalene across the Sinai to Alexandriaâ€”into nearly 2000 years of exile…
In memory of herâ€”
Margaret
www.margaretstarbird.net 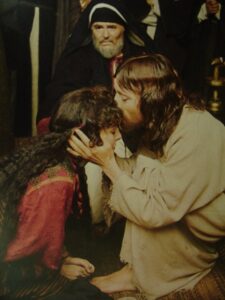 Margaret Starbird wrote the other day:

Iâ€™m always amazed at the contortions New Testament scholars go into in an attempt to avoid seeing and stating the obvious.Â  The CNN â€œspecialâ€ segment about Mary Magdalene aired tonight. One scholar (Dr. Nicola Denzey Lewis) declared twice that â€œground zeroâ€ for the idea that Mary Magdalene was the wife of Jesus was the Gospel of Philip, which states that Mary was the â€œcompanionâ€ or â€œconsortâ€ of Jesus and that he kissed her often on herâ€¦. (sadly the location is missing, but we are told that the apostles were jealous of Maryâ€¦.because Jesus loved her more than all the rest of themâ€¦.

If she had read my â€œWoman with the Alabaster Jar,â€ published in 1992 and cited by Dan Brown in The DaVinci Codeâ€), Dr.Lewis would have known that for many of us â€œground zeroâ€ is the canonical
Gospel of John which names the woman who anointed Christ at the banquet at Bethany (Mary) and dried his feet with her hair and follows the passion narrative all the way to the sacred reunion of the Sacred King and his Bride at the tomb on Easter morning.Â  This has nothing to do with the (2nd or 3rd century) Gospel of Philip. All four canonical Gospels mention the anointing of Jesus by a woman and three place this event in Holy Weekâ€”followed closely by the Passion of the Christ and his resurrection. This liturgical sequence is reminiscent, even a reenactment of ancient rites of â€œhieros gamesâ€ indigenous to the Near Eastâ€”where the Sacred King is anointed and united in marriage with a royal priestess/princess and later sacrificed, mutilated, executed and entombed.
After three days his Bride/consort returns to the tomb to mourn him and finds him resurrected. These ancient rites go back to neolithic times and are repeated in the Gospel narratives, where Mary and Jesus embody the archetypal Bride and Bridegroom â€œin the fleshâ€â€”.

In the CNN segment, the question was raised: What happened to Mary Magdalene?Â  Back in the 1980â€™s when I was researching everything I could find about Mary Magdalene, it struck me that in spite of her importance in the final chapters of the Gospelsâ€”beginning with the anointing scene and ending with the reunion with Jesus at the tomb (â€œDonâ€™t keep clinging to meâ€)â€”Mary totally disappears from the story, never mentioned in the epistles or in the Book of Acts of the Apostles.Â  What happened to her? The mother of Jesus and other female disciples show up in Acts and elsewhere.Â  Only Mary, Martha and Lazarus are totally missing, except for later legends that try to
fill in the gaps, placing them in Gaul around AD 42â€¦. But why did they leave?

One afternoon in 1988, I sat down at my computer and wrote a storyâ€”which is now the fictional opening â€œPrologueâ€ in my â€œAlabaster Jarâ€ bookâ€”explaining how we came to lose the Beloved of Jesus for two millennia.Â  Sensing danger to the wife of Jesus, Joseph of Arimathea, the â€œcustodian of the Grail,â€ came to her on Easter in the evening and convinced her to flee with him to a place of safetyâ€¦which would only have been necessary if she were possibly pregnant withâ€”or the mother ofâ€”a child of Jesus.Â  Protecting the royal family would have been a top priority of the friends and followers of Jesus, the Davidic Messiah of prophecy.

Imagine herâ€”meditate on herâ€”over these coming days, riding on a donkey across the Sinai under the protection of Joseph of Arimatheaâ€”â€œdefiled and defamedâ€ seeking refuge in a foreign land, fulfilling the prophecy of the â€œMagdal-ederâ€ from Micah 4:8-11.