Words of wisdom fell like pearls (as usual) out of the Dalai Lama on the desperate need for people of all faiths to work together at this juncture in human history. Â But not as usual, they were spoken to Glenn Beck. Â T’was an awesome conversation on interfaith-ism. (I think that needs to be a word, interfaithism)

Glenn Beck told the Dalai Lama about the interfaith work he himself is doing “trying to bring different faiths together without mixing our theology,” in hopes of repairing some of the religious strife ripping the world apart these days. 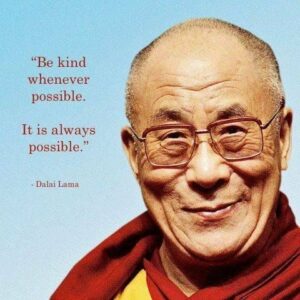 The Dalai Lama replied the way in which religions hate each other so much “is one of the biggest heartbreaks of his life right now.”

The Buddhist Pope as he’s been called says “we are dividing ourselves. That weâ€™re being so foolish by dividing ourselves when we all will stand together. We all have similar, if not the same goal. Any good religion has the same goal, and that is happiness, love, and peace. And if we canâ€™t unite on that goal as humans â€” because he said everybody on earth needs to recognize that weâ€™re all equal, that we are all the same. Weâ€™re all human. Weâ€™re all born, and we all want to be happy. But as he said, there is some troublemakers in that lot as well. And he said many of the troublemakers are highly educated people that are using their position to crush others. He said weâ€™re social animals and yet weâ€™re very self-centered, and those two things donâ€™t match. He said we have to get back to the basics â€” his words â€” back to the basics, because this is not good for our future, to be so self-centered, if we have to have each other to lean on. And he counseled that we begin to be friends again. He said friendship comes from trust. Trust comes from caring and serving others.”

Read the entire conversation and see a short video clip of the two here at The Blaze.