I often ponder the Problem of Evil (known in theology and philosophy as Theodicy) and have many times considered the “cooperative pre-incarnation movement” someone mentioned in Kathleen McGowan’s Magdalene forum recently. Â Cooperating with each other and with the Universal Consciousness (God?) and choosing, AGREEING to incarnate on earth does seem logical and more sensible than the rather loose karma-reincarnation theory.

Maybe it went something like this.Â  We were a group of volunteer souls about to be sent onto this egg, this earth-planet, and were gathered together for a sort of briefing, a great gathering of souls about to fill the Hall of Souls on Earth.Â  We could have been told something like:Â  You will have minds capable of full consciousness, but your bodies and physical surroundings will constantly distract you, keeping you in a kind of mundane every-day unconsciousness. Your spirit will be asleep in this unconscious state that you will be in. If you can wake up, if you can figure out you are not your body, not the thinker inside your head but the higher soul watching all this thinking going on, you will become fully conscious, “awakened.”Â  By waking up from the mundane unconsciousness you are one more mind in the critical mass to help the Universe become conscious of Itself — the purpose of humanity in the first place.Â

But back to the mundane unconsciousness. It can lead to horrors.Â  Unconscious people do despicable horrible things to others.Â  Some of you will fall into those traps and do awful things, others of you will be victims of these horrors and not understand why or what the heck is going on.Â  You will get angry, desperate, suicidal.Â  It ain’t gonna be a picnic.Â  But all that pain and suffering forces your mind to go deeper, deeper until it finally says hey wait a minute, I am not really this little me, I am the field of awareness in which “me” happens!Â  (Read Eckhart Tolle’s A New Earth for the best explanation of this awakening from little me unconsciousness).Â

Okay, so anyway, I like to think we were given the choice, asked if we could handle going down into the flesh and going thru incarnation after incarnation where we would sometimes be bad guys, sometimes be victims, sometimes be both, but always trying to make our way thru suffering and bewilderment, thru fear, greed, power-lust, pain until we finally looked long and deep enough to find what is really going on.Â  We then figure out the REAL reason we are here for — which is to wake up as individuals and thus help Universe wake up, achieve full awareness of Itself.Â  That is the closest I can come to “solving” the Problem of Evil.Â  <snort> And I have been grappling with it for many years.Â  The standard solutions offered by philosophers and religionists such as, ‘God gave us Free Will so we end up with some people perpetrating evils,’ do help me somewhat, but they fail to answer why God allows suffering.Â  (The problem of suffering is a part of the Problem of Evil in philosophical/theological discourse).Â  We can say that because of Free Will some men choose to do evil and that is why your little girl got molested and murdered.Â  Okay, painful as hell but we can see the logic of that.Â  HOWEVER, what about this, God?:Â  What causes the same little girl to be born beautiful and healthy but then get cancer when she is in first grade, drop out of school, end up bald and lying in a cancer ward frail as a waif, body racked with pain, wasting away wondering what happened to her life?Â  What about THAT suffering?Â  It wasn’t caused by Free Will.

So yeah, evil.Â  Ugh.Â  Suffering of the innocent, double Ugh.Â  That is the one I am grappling with now, solitary philosphical arguments going on in my head.Â  <laugh> Â  The closest I have gotten recently, and I have not yet gotten it into words (thank you list-friends for triggering yet another session) is some very wispy realizations while reading Eckhart Tolle’s A New Earth and Dinesh D’Souza’s What’s So Great About Christianity.Â  Suffering of the innocent from flooks of nature like cancer and horrible lingering fatal diseases, is another thing that forces us to go DEEP.Â  The parents of that child and the child herself (or in the case of adults dying of fatal diseases, the person and their loved ones) are given suffering as this huge doorway, not just a window, into the Awakened Realm.Â  Back at the beginning when we had our cooperative pre-incarnation briefing we were also told that the system was set up so that some of us would suffer from flooks of nature, from physical waste and excruciating pain.Â  This suffering would then force us and those around us to think, think, THINK and to go deep and WITHIN to find cosmic answers.Â  Some of us might even awaken while observing such hells, others would get into despair and curse at Universe/the Powers that Be, etc.Â  But some would use the suffering as that window — actually nice big door — of opportunity for awakening.Â

Still working out the kinks of this one.Â  I’ll check back in a few years (!) which is usually how long I chew on each of these elements.Â  <laugh>Â  Thanks to all the spiritual writers and bloggers who pose such dilemmas and write about them, thus giving fuel to my fodder of pondering.

Check out the intriguing article titles by Dr. MÃ­ceÃ¡l Ledwith. Â Click the link above to access them.

Access all of the above articles from this page:Â  http://www.hamburgeruniverse.com/articles.html 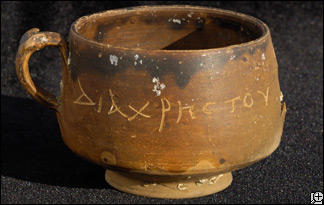 Oct. 1, 2008 — A team of scientists led by renowned French marine archaeologist Franck Goddio recently announced that they have found a bowl, dating to between the late 2nd century B.C. and the early 1st century A.D., that is engraved with what they believe could be the world’s first known reference to Christ.

If the word “Christ” refers to the Biblical Jesus Christ, as is speculated, then the discovery may provide evidence that Christianity and paganism at times intertwined in the ancient world.

The full engraving on the bowl reads, “DIA CHRSTOU O GOISTAIS,” which has been interpreted by the excavation team to mean either, “by Christ the magician” or, “the magician by Christ.”

“It could very well be a reference to Jesus Christ, in that he was once the primary exponent of white magic,” Goddio, co-founder of the Oxford Center of Maritime Archaeology, said.

He and his colleagues found the object during an excavation of the underwater ruins of Alexandria’s ancient great harbor. The Egyptian site also includes the now submerged island of Antirhodos, where Cleopatra’s palace may have been located.

Both Goddio and Egyptologist David Fabre, a member of the European Institute of Submarine Archaeology, think a “magus” could have practiced fortune telling rituals using the bowl. The Book of Matthew refers to “wisemen,” or Magi, believed to have been prevalent in the ancient world.

According to Fabre, the bowl is also very similar to one depicted in two early Egyptian earthenware statuettes that are thought to show a soothsaying ritual.

“It has been known in Mesopotamia probably since the 3rd millennium B.C.,” Fabre said. “The soothsayer interprets the forms taken by the oil poured into a cup of water in an interpretation guided by manuals.”

He added that the individual, or “medium,” then goes into a hallucinatory trance when studying the oil in the cup.

“They therefore see the divinities, or supernatural beings appear that they call to answer their questions with regard to the future,” he said.

The magus might then have used the engraving on the bowl to legitimize his supernatural powers by invoking the name of Christ, the scientists theorize.

Goddio said, “It is very probable that in Alexandria they were aware of the existence of Jesus” and of his associated legendary miracles, such as transforming water into wine, multiplying loaves of bread, conducting miraculous health cures, and the story of the resurrection itself.

While not discounting the Jesus Christ interpretation, other researchers have offered different possible interpretations for the engraving, which was made on the thin-walled ceramic bowl after it was fired, since slip was removed during the process.

Bert Smith, a professor of classical archaeology and art at Oxford University, suggests the engraving might be a dedication, or present, made by a certain “Chrestos” belonging to a possible religious association called Ogoistais.

Klaus Hallof, director of the Institute of Greek inscriptions at the Berlin-Brandenburg Academy, added that if Smith’s interpretation proves valid, the word “Ogoistais” could then be connected to known religious groups that worshipped early Greek and Egyptian gods and goddesses, such as Hermes, Athena and Isis.

Hallof additionally pointed out that historians working at around, or just after, the time of the bowl, such as Strabon and Pausanias, refer to the god “Osogo” or “Ogoa,” so a variation of this might be what’s on the bowl. It is even possible that the bowl refers to both Jesus Christ and Osogo.

Fabre concluded, “It should be remembered that in Alexandria, paganism, Judaism and Christianity never evolved in isolation. All of these forms of religion (evolved) magical practices that seduced both the humble members of the population and the most well-off classes.”

“It was in Alexandria where new religious constructions were made to propose solutions to the problem of man, of God’s world,” he added. “Cults of Isis, mysteries of Mithra, and early Christianity bear witness to this.”

The bowl is currently on public display in the exhibit “Egypt’s Sunken Treasures” at the Matadero Cultural Center in Madrid, Spain, until November 15.

Yesterday was the first of the annual Ten Days of Awe, the Jewish New Year aka the High Holy Days, aka Rosh Hashanah…Â  You can just bet Yeshua and Magdalene honored this holy season every year.Â  It’s when the gates of heaven are said to be flung open and blessings rain down for ten days culminating with Yom Kippur when the gates go shut again. In the days of the Jerusalem Temples, the priests would open up the holy place and for a short time even roll up the curtain separating the most holy place, thus revealing to view the Ark of the Covenant with its God-and-Goddess entwined in the Shiva-Shakti sitting lovemaking posture.Â  Wow, that woulda shocked the populace 2000 years ago, eh?Â  Nah, not if you consider other cultures believed and honored sacred union, too. People were used to that kind of thing and only later did it become “heresy.”

Here is something in my God Has a Wife! presentation about the sacred union “posture” of entwined Goddess-and-God on the Ark of the Covenant:Â  http://northernway.org/presentations/godwife/79.html Â  Click on the speaker symbol to hear me gab about it, and then click thru to the next few slides.