How sad the author of the God Delusion will start messing with kids’ minds now, too. See announcement below. I have always felt that atheists are just one step away from becoming gnostics, if they could just get over the hump of their anger toward the Christian Church that they feel has so wronged them. Â They look at the Catholic Church’s many mistakes over the centuries and either obsess or gloat over them all the while forgetting that the Roman Church is not Christianity. It’s a fine line between agnosticism and gnosticism, methinks. If only they understood that yes, their scepticism is healthy, but so is a luminous spiritual life. Howabout a little bit of both for these kids — and their parents? Â Sheesh.
+Katia

Give Richard Dawkins a child for a week’s summer camp and he will try toÂ give you an atheist for life.

The author of The God Delusion is helping to launch Britain’s first summer retreat for non-believers, where children will have lessons in evolution and sing along to John Lennon’s Imagine.

The five-day camp in Somerset (motto: “It’s beyond belief”) is for children aged eight to 17 and will rival traditional faith-based breaks run by the Scouts and church groups.

Budding atheists will be given lessons to arm themselves in the ways of rational scepticism. There will be sessions in moral philosophy and evolutionary biology along with more conventional pursuits such as trekking and tug-of-war. There will also be a Â£10 prize for the child who can disprove the existence of the mythical unicorn.

Instead of singing Kumbiya and other campfire favourites, they will sit around the embers belting out “Imagine there’s no heaven . . . and no religion too”.

Dawkins, who is subsidising the camp, said it was designed to “encourage children to think for themselves, sceptically and rationally”. All 24 places at the retreat, which runs from July 27-31, have been taken.

Afternoons will be filled with familiar camp activities such as canoeing and swimming but the mornings will be spent debunking phenomena such as crop circles and telepathy.

I sent this to my gnostic Archbishop (the bishop who consecrated me) and he wrote back:

“Woe to you (Pharisees)!Â  Ye search the entire world for converts and make them twice the children of hell that ye are.”Â  Yeshua paraphrased.

Thank you to all who have sent their congratulations and blessings on my consecration to the Episcopate (being made a bishop). It took place on Trinity Sunday, June 7, 2009, at the Chapel of Saint Sophia in New Jersey with family and friends in attendance. My eleven year old daughter even held the prayer book for the Archbishop. It was a wonderful thing, I am still “floating” so to speak, buoyed by the Holy Spirit.

Archbishop Christian Umberger, XP here crowns (aka “miters”) me with the miter near the end of the rite. The miter symbolizes the flames of the holy spirit, Divine Sophia, that descended and settled on the heads of the apostles at Pentecost. You can see my crosier and even my new bishop’s ring in the photo. Â I wish you could see the detail of my bishop’s ring because it matches the Cathar stele monument symbol at Montsegur. 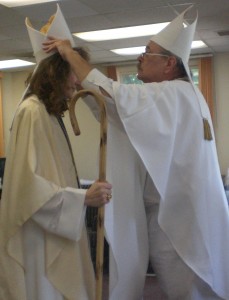 I took the ecclesiastical name +Sophia-Katarina.

Here we are outside the Chapel after the consecration 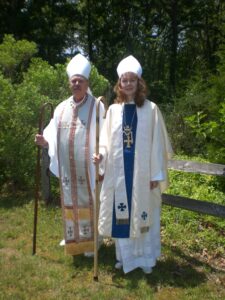 Archbishop Christian-Thomas (Umberger) and I along with others founded a semi-Gnostic Catharist early Christian style seminary for those wanting to pursue Holy Orders with Apostolic Succession. Â Come study with us as a seminarian, or if you can’t, perhaps join in the discussions here at the Seminary forum.