Okay, so I have a PhD in Religion and teach world religions online, especially esoteric alternative religions with their roots in our ancient history. Yet I read this article and learned things I never knew — or maybe I thought I already knew. Ha ha. Â Such as:

Alawites (like Assad of Syria) believe you can be reincarnated as a plant. Â They won’t eat certain kinds of plants because it might be a relative… Â This might be why Yazidis still don’t eat lettuce.

Zoroastrians hate cats because they believe they are inhabited by evil spirits. I knew they worshipped dogs, and that during the Iranian purge of Zoroastrians, the new religionists (Muslims) would attack the Zorastrian family dogs. But I didn’t know they fear cats to this day. Ironic that Muslims fear dogs to this day, won’t touch them due to them being unclean.

The Druze (such as George Clooney’s new wife) believe in family reincarnation, not just “ordinary reincarnation.” Druze believe they can reincarnate as other Druze (much like Northern European “heathens” believed). Â Furthermore,Â Druze youth mustÂ be initiated into the religion or theyÂ don’t get to know the secret inner teachings. Â The article author doesn’t know if Mrs. Clooney was actually initiated into her ancient faith as a teenager. I knew the Druze were an esoteric religion influenced by Plato and Aristotle — they are Gnostic neo-platonists, but I didn’t know they were so secretive of their full teachings, requiring initiation of their youth.

Zoroastrians and Mithraism are alive and well, still performing the Mithras worship annual bull sacrifice. The Yazidi priest still whispers in the ear of the bull before he is killed just like the ritual 5000 years ago in the Epic of Gilgamesh! The taurobolium later evolved into a bloody initiation and then “baptism” cleansing ritual. Sacrificing a bull originallyÂ symbolised the death of the Age of Taurus as the ancient world entered the Age of Pisces (thousands of years ago). Now we are moving into the Age of Aquarius (it goes backward thru the Zodiac, called the precession of the equinoxes) so I wonder if we will be killing fish. Well, we “killed” Jesus…he was a sacred fish. That is a wierd thought. Carl Jung delved into it, but I digress. Back to stuff I learned in the National Geographic article above…

The reason the Yazidis put conical shaped rooves on all their temples. It was done to represent the Sun-god’s rays — these people date back to the time of the Pharoahs. The Yazidis invented the handshake, it is connected to the Mithras worshippers secret handshake. The Yazidis won’t eat lettuce, and their long mustaches symbolize they are worthy to learn secret teachings.

Samaritans, as in “the good Samaritan” Bible story, still exist and pray daily by bowing on the ground (similar to Muslim prostrations) toward their holy mountain, Mount Gerizim in the West Bank / Israel. They are almost as old as the Jews, and still worship there. I encountered some of them during my trip to Israel in the 1990’s, but I forgot their daily prostrations toward a holy location resembles Muslim prayer toward Mecca. The Samaritans pre-date Islam by at least 1000 years…

As I read, there were also things I did indeed know, but was reminded of, such as:

The Pythagoreans would not eat beans — why not was kept as a sacred secret. (Must’ve been the gas!)

There are Gnostics (with a capital G) that survive to the present day, not only the Druze in Israel, Jordan, Lebanon and Syria, but the Mandeans who have been quietly hiding out for 2000 years in the marshes of southern Iraq. They are neighbors with other religious hiders such as the Marsh Arabs who worship pre-Islamic gods of Mesopotamia — Old Testament “pagans” who live near the spot the Garden of Eden supposedly once stood and know it.

If you want to hear the language spoken by Jesus / Yeshua and Mother Mary, and Magdalene, you no longer have to travel to hidden villages in Syria and Iraq. You can go to Detroit, USA. Yes, indeed there are now more Aramaic speakers settled there than in my favorite ancient Christian village of Maaloula, Syria (now completely deserted thanks to al Nusra terrorist murderers). We study the Aramaic Lord’s Prayer in our Esoteric Mystery School lessons, it is so beautiful to hear in Aramaic and even to read and speak in the English translation of the Aramaic. Â The Aramaic version up until 2013Â was sung daily by children’s choirs in Maaloula — a favorite experience for Western visitors to Syria. That experience is lost now forever unless the nuns of St Thecla Monastery / Convent somehow survive Syria’s dissolution and somehow manage to return there in the distant future. But even if the nuns go back, and clean up their pillaged, desecrated mountain-top home, will the Christian families who lived there since the time of Christ also come back? Doubtful. Most fled to Damascus in 2013, a few made it out of the country. Â I wonder how many are in Detroit…and if any of them can sing the Lord’s Prayer. A haunting, lovely, other-worldly sound…. Â You can still find it on YouTube, thanks to religious tourists in 2010 before the Syrian Civil War. Â Search for St Thecla Syria Aramaic Lord’s Prayer.

Freddie Mercury, legendary lead singer of Queen, was born into a Zoroastrian community surviving in exile. He was even initiated into the religion as a coming-of-age ritual — justÂ like boys 3000 years ago.

The article also answers the question “Why aren’t there druids running around in London”, since some of their contemporaries have survived in the Middle East? His answer is considered insulting to some, but hey, survival of the fittest, people, and Christianity has pagan DNA. Just look at this week’s European holiday! (Halloween) 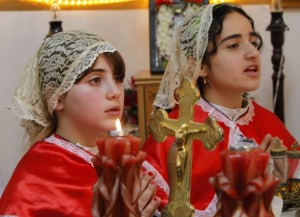 There are a lot of ChristiansÂ bravely facing death in the Middle EastÂ these days.

“We are Prepared to Die Here and Now” said one Iraqi Christian woman to ISIL marauders when theyÂ demanded sheÂ and her friends convert. Read about it in the Catholic Herald.

Meantime in Syria, a country that is 10% Christian (a hundred years ago like Lebanon, it wasÂ over 60% Christian) a Priest and 20 of his church members have been kidnapped, another priest and nuns have gone into hiding, and it is not looking good for them.Â There are noÂ Christian special forcesÂ  to go in and rescue theÂ kidnapped ones, nor those being ethnically cleansed.

Then there is this great story of a very brave 28-year-old from Wisconsin who said, “I was sick of just sitting and watching Christians getting slaughtered,” and took off to fight ISIL in Syria. He ran into another American guy doing the same thing and barely had time to get his name before ISIL shelled their position.

“Like many Americans, Jordan Matson is outraged by the brutality of the Islamic State. But unlike virtually every other American, he decided to take the militants head-on.”

Are we going to allowÂ ethnic cleansing in the Middle East?

â€œOne cannot resign oneself to conceiving the Middle East without Christians,â€ Vatican ambassadors sent by the Pope said in an officialÂ statement. TheyÂ reminded everyone ofÂ the 2,000-year history of Christians inhabiting the Middle East. Two thousand years is a long time to just throw away. Jews have been there even longer, of course.

I really like this giant Detroit billboard, “Save the Iraqi Christians!”