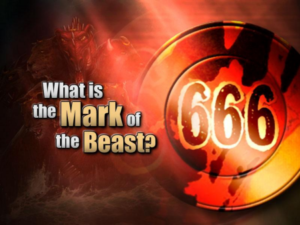 For anyone who saw Morgan Freeman’s “The Story of God”, please do not believe that “666” — the number of the beast” — is to be identified with “Caesar Nero.” That theory is half-baked at best!

The number 666 is the ancient Greeks’ (Pythagorean) equivalent of “Yang” energy in the extreme: “power without mercy.” It is the power of the sword, the crocodile, the dictator, the predator in any form–including Nero, but also Caligula, the Roman Inquisition, Hitler, the holocaust, ISIL… and you get the picture. The Beast is “masculine-solar” energy stripped of its “feminine-lunar” counterpart — now rampant and uncontrolled.

The earliest Scriptural references of “666” are found in the Hebrew Bible: 1 Kings 10:14 and 2 Chronicles 9:13: “The weight of gold paid in yearly tribute to Solomon was 666 golden talents.” Apparently “666” golden talents was a fitting tribute for a powerful king — a pure reflection of his status.

Using John Michell as a major source, I explain this pretty thoroughly in my 1995 title, Magdalene’s Lost Legacy: Symbolic Numbers and Sacred Union in ChristianityÂ — especially in the two chapters about the Apocalypse (Book of Revelation) in that book: http://margaretstarbird.net/magdalenes_lost_legacy.html

peace and light,
Margaret
The Woman with the Alabaster Jar

Dear Mrs. Starbird,
I have a couple of Jewish friends who will say that during the time of
Jesus, no rabbi would be accepted if he had not been married and so it
would be perfectly plausible that Jesus and MM were married.
However, some Christian scholars will turn around and state that there
were many celibate men at the time of Jesus who were considered to be holy
men.
Is the latter statement true, in your estimation?

My major source for believing that marriage was a â€œcultural imperativeâ€ for Jewish males is Dr. William E. Phipps, head of the Department of Philosophy and Religion at Davis and Elkins College (West Virginia). Dr. Phipps wrote two books on the subject, â€œThe Sexuality of Jesus,â€ and â€œWas Jesus Married?â€ A Jewish father in the first century had 5 duties toward his son:

1) Have him circumcised on the 8th day after his birth; 2) offer an offering in the temple on his behalf; 3) teach him Torah; 4) teach him a trade (so he could support himself and his family); and
5) find him a wife before his 18th birthday (20th birthday if the son was studying to be a rabbi). If the father failed to find a wife for his son, the community elders helped him! Apparently girls were not required to marry, but boys were!

Occasionally Christians suggest the the Essenes were unmarried, but when females were found in tombs in the cemetery at Qumran, they had to revise that assertion. What appears to be true is that Essene males would leave their wives and families for a period of training and then return to them. Life-long celibacy was not condoned. It was a breach of the first commandment God gave to Adam in Genesis: â€œBe fruitful and multiply.â€

Christian exegetes occasionally mention Rabbi Akiba (2nd century) who devoted his life to studying Scripture, but the Talmud says in several other places that he was married and then divorced his wife so that he would have more time for his studies, so even his (often cited case for celibacy) is unclear.

If your Christian friends can name a 1st c. Jewish man who was unmarried, that would surprise me. A â€œbeardless youthâ€ is not yet old enough to marry and St. Paul, who claims to be celibate during his ministry, also asserts that he is a Pharisee, so he must have been either widowed or divorced. Divorce was really easy back in those times, so many men may have enjoyed that single stateâ€¦. but they were not â€œlife-long celibates.â€

The Hebrew language did not have a word for â€œbachelor.â€ The word they now use is â€œravakâ€â€”which means â€œempty.â€

I hope this helps!

in memory of herâ€”
Margaret