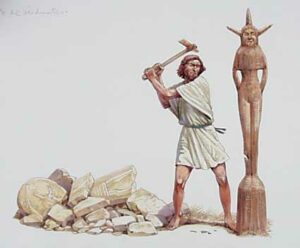 I received the following email from an author named Frank Verderber. He read the Asherah material on our website, and I think viewed my God Has a Wife!Â presentation. He responded as follows (and I wonder how I should respond back to him — he’s obviously not a “believer” in a Feminine God alongside the Masculine God…).

Frank Verderber writes:
Some of what you printed is true concerning Asherah, but most is not.
You quote the Bible as reference concerning her, and that’s fine, except
you make a wholly unfounded statement [ a belief statement, not
corroborated] that she was a consort of Yahweh. The Israeli God Yahweh
had no consort, and was referred to as also as EL, Adoni, Ja or Jah as
general descriptions of Divine character. Yahweh is his personal name
and means “was, is, and always” which in the Greek would be rendered
“Alpha and Omega.” The idea that there was a redaction of the Hebrew
Scriptures around 500 BC is spurious conjecture based on “Documentary
Hypothesis”, and has been refuted eloquently and abundantly. However,
this idea of a consort was conjuncture – that came from a few 19th
Century Epigraphers, that mistakenly confused Baal ceremonies with those
of the Israeli’s ceremonies of Yahweh. IF you are interseted in
understanding the role of Asherah the Sea goddess, you need to read the
a few anthologies Akkadian and Urgaritic myths [See: The Ancient Near
East, Volumes I & II, by James B. Pitchard] In them Baal is furious
that he has no princedom but he has the high honor of serving El.
Puissant Baal makes a great amount of tumult and so enters Asherah as a
“sister” who then requests that a princedom [house] be made for Baal.
El orders a “house” be made for him down by the Sea [Mediterranean] And
so it is the geographic location of Canaan or the Gaza strip that holds
the House of Baal or if you can interpolate: the “House of Lucifer.”
That is why there are so many epics regarding the hyper human-angelic
populous called the Nephilim or the Anakites. That is why there is so
much trouble in that region of the world. However, Asherah is the later
name of the original goddess In-nanna who was the daughter of Nanna at
the time of the River People, Apsu [before the Chaldees, Ur, the Sea
people] Nanna is the Moon god whose symbol is the crescent moon, and a
flame, while In-nanna is the Star. Shamoush was In-nanna’s sibling and
his symbol was the Sun. If you follow the development of Asherah, you
will find that she is no more than one of the following goddesses whose
name changed within geographic regions [ In-nanna = Astarte = Asherah =
Venus = Cybele = Artemus = and today = Fatima. Interestingly, Fatima
from Spain, is the name given to the town in Spain before the Europeans
took it from the Islamic leaders. But note that Mohammad’s sister was
named Fatima. Can you now see the Middle-eastern genesis of the goddess?

I hope this was constructive.

Asherah is the Hebrew word translated to English as “groves” in the OT. It relates to the Babylonian (Astarte)-Canaanite (Ashtoroth or Ashtoreth depending on which area) goddess of fortune, fertility and happiness, the supposed consort of Baal. It also implies the sacred trees or poles set up near an altar for “her” worship.

When Moses went back up Sinai to receive the replacement tablets–regarding the Canaanites (and others), God told him…

Ex 34:13 But ye shall destroy their altars, break their images, and cut down their groves:

Baal is always associated with gardens and trees. One can see the later use by the Celts concerning “May Poles” and still in use today. Asherah or Astarte or Venus were understood as Warrior goddesses, who could destroy an enemy encampment by seducing the enemies of her devotes. The idea is sexual in nature and translates to the use of the modern idea of feminine aura or power. This idea has always been around – found esecially in the wiccan cults. But Asherah is more at a cluster or many, such as in the ancient Qualmish gods of the Kaaba in Mecca.

So. Any ideas what to say to him in response? Don’t think he’s very open to our point of view, but at least he is very polite and not overly condescending.

Here is my (Katia’s) God Has a Wife!Â presentation which I think the gentleman must have viewed because it’s there I talk about Asherah and Asherah poles.
*

Oh wow, this letter from Satan to Pat Robertson (below) is really a hoot. Â I was just reading (in Myth and Ritual of Christianity by Alan Watts) about the arena Lucifer aka Satan really works in. According to Watts, Satan doesn’t even engage in lesser forms of evil like violence and war, he is far too clever and subtle for that and commits the purest forms of evil. Lucifer-Satan is extraordinarily gifted as a wolf in sheep’s clothing, an expert on human nature, and moves with the light-workers, the peace-makers, the smiling do-gooders. Â Satan moves and works among the beautiful ones, fooling everyone, says famous author Alan Watts (back in the late 60s when he wrote this book).

Anyway, here’s the Screwtape Letters style note to Pat Robertson after Pat said the Haiti earthquake was caused by a deal Haiti made with the Devil.

I know that you know that all press is good press, so I appreciate the

shout-out. And you make God look like a big mean bully who kicks people when

they are down, so I’m all over that action. But when you say that Haiti has

made a pact with me, it is totally humiliating. I may be evil incarnate, but

The way you put it, making a deal with me leaves folks desperate and

impoverished. Sure, in the afterlife, but when I strike bargains with

people, they first get something here on earth — glamour, beauty, talent,

wealth, fame, glory, a golden fiddle. Those Haitians have nothing, and I

mean nothing. And that was before the earthquake. Haven’t you seen

“Crossroads”? Or “Damn Yankees”? If I had a thing going with Haiti, there’d

kind of thing. An 80 percent poverty rate is so not my style. Nothing

against it — I’m just saying: Not how I roll.

come on, you’re making me look bad. And not the good kind of bad. Keep

blaming God. That’s working. But leave me out of it, please. Or we may need

to renegotiate your own contract.