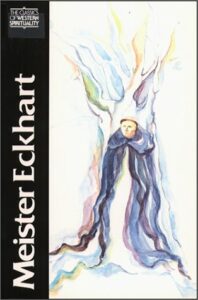 Now we know why Tolle changed his first name from Ulrich to Eckhart. He says he greatly admired and identified with the work of Meister Eckhart, the famous Christian mystic (tried by the Inquisition as a heretic). Meister Eckhart is a voice from the past speaking to us today, or now. And Tolle rocks.

Found the Meister Eckhart quote above in an old book written during the World War II London Blitz by the not-yet-famous still-quite-young Anglican-priest-turned Zen writer, Alan Watts. (Link below). Tolle says he read Alan Watts and Joel Goldsmith, two sort of Zen Christians. The harmony between Zen, the Gospel of Thomas, their work and Tolle’s is cool.

BEHOLD THE SPIRIT, by Alan Watts

Click on “See Inside This Book” and you can see the other quotes Watts scribed in the front cover along with the Meister Eckhart quote about the Now-moment.

In college we studied Medieval Philosophy where Meister Eckhart got much attention. We pondered over his Now-moment and had no idea how Zen it was. And what’s his most famous quote of all…oh yeah, here it is: “the eye that I see God with, is the same eye that God sees me with..” or something like that. Yeah, he’s dangerous dontcha know, might wake up some people. The “authorities” had to drag him before the Pope, put him on trial and brand him heretic. I think Eckhart died mysteriously before the verdict was reached. They never even found his body. But his disciples carried on his teachings, though very quietly and carefully. Here’s to them and…

Here’s to the NOW,