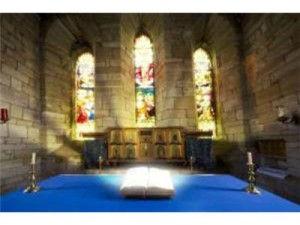 Last week, Bishop James, the Dean of our seminarian/priesthood Holy Orders program, suggested I share the info below with you Mystery School initiates.  It looks most intriguing!

Bishop James writes: “Dr. Heiser is a fundamentalist Christian with a paranormal, esoteric, twist.  It is interesting material, and he does back up what he says with peer reviewed sources.

Here are links to the homepage and podcasts of Dr. Michael S. Heiser,  one of the developers of the well-known Logos Software and an instructor in the almost equally well-known (notice the intentional neutrality of the term) Liberty University Distance Learning Program.

One of his recent publications is The Unseen Realm: Recovering the Supernatural Worldview of the Bible. A major academic interest is the Divine Council (quoted from his site):

Psalm 82:1    God has taken his place in the divine council; in the midst of the gods he holds judgment.

“The term divine council is used by Hebrew and Semitics scholars to refer to the heavenly host, the pantheon of divine beings who administer the affairs of the cosmos. All ancient Mediterranean cultures had some conception of a divine council. The divine council of Israelite religion, known primarily through the psalms, was distinct in important ways.”

He also writes about the paranormal, ghosts, demons and UFO’s. He says “I am most intrigued by high technology in the ancient world, cultural diffusionism, archaeological / artifactual anomalies, and western occult and esoteric traditions.”

I encourage you to review his site: http://drmsh.com/

Materials on the Unseen Realm: http://www.moreunseenrealm.com/

And I especially encourage you to listen to his podcasts: http://www.nakedbiblepodcast.com/

As you may imagine, our approach in Holy Orders III is somewhat different. Nevertheless, it is important to be informed about the different theories and approaches in the Biblical disciplines.

Please let me know what you think about his materials.  If your reply will be of interest to most seminarians, please post it to the critical thinking module.

As our Mystery School’s Melchizedek initiates know, the Shem-ha-mephorasch refers to the 72-Names of God in esoteric Judaism aka Kabbalah. The 1998 movie Pi studies makes mention of the “two-sixteen” number or the 216 lettered name of God (each of the 72 names has 3 letters, and 72 x 3 = 216.

The 666 number of the Beast in the Greek Bible’s book of Revelation can be written as 216 = 6 x 6 x 6
In the Left Behind series of Christian End Time’s fiction novels, the Anti-Christ character — I think his name is Nikolai Carpathia — has a jet numbered 216 and something else, his residence maybe, I forget what (it’s been 25 years since I read those novels). He uses 216 because it is 666 expanded as 6 x 6 x 6 = 216.

But in Hungarian-jewish Darren Aronofsky’s movie Pi, the 216 “two-sixteen number” as the Cohen genius kid calls it, is in reference to the name of God with the same amount of letters (72 x 3 = 216). In the movie Pi, the kid can figure out the stock market using the number. The Golden Ratio (also featured in The Davinci Code), magical number patterns in the universe, gematria, and Kabbalah, are each mentioned. Pi was Aronofsky’s first movie. His most recent movie was Noah in which he also has esoteric Jewish mysteries such as Zohar (the magical gold substance) and Nephilim (fallen angels who protect man and when they die, shoot up to heaven like angels returning home to God). Aronofsky has other esoteric Judaisms in the movie Noah.

Here’s the wikipedia article about the 72 names of God and all the math magic,

The Red Tent — one of the books used in our Mystery School studies since 2001 — has become a TV movie.

It airs this Sunday night on Lifetime Television — (channel 108 on Dish TV).  We just set our DVR to record it.  I wonder if it will mirror the book nicely.  The trailer was awesome.

I also wonder if they will correctly pronounce the name of Dinah, the lead character (pictured right).  In ancient Hebrew it would be “DEE-nah”.

Some portions of the book I didn’t agree with, such as the way Rebecca and Laban were portrayed. But the overall story of the book, highlighting as it does the pagan roots of Judaism (and thus of Christianity) is very gripping.

I hope some of you Mystery School members will watch it with me. The TV movie will probably become available on Amazon streaming video and Netflix in 2015, so if you miss it the first time it airs, you can always watch it elsewhere in future.

The true Name of the Divine (God / Goddess / Deity / Divine Consciousness) according to Judeo-Christian belief is considered ineffable — unpronounceable. But the initiates know how to utter it. Actually they have to learn to “hear” it first.

For millennia Judaism has protected the secret of the sound of God’s name.  After the fall of Jerusalem, and the long exile that followed, it is believed the Jews lost the true pronunciation.  It is feared no one was teaching it, no one was passing down the secret of HaShem (code word for the Name of God) — they were all being killed.

But we know tiny pockets of initiates DID survive over the centuries,  for example in Babylon (Iraq) and Safed (Northern Israel near Galilee). The Babylonian Jews finally left Iraq, but they still knew the Sound of the Name. The Safed mystics and initiates are still there in Northern Israel.

The Name of God has been passed down in an unbroken line. How to “hear” it and then utter it (in one’s mind– always be careful about speaking it out loud) is one of the secret teachings of western mystery schools.

Our Ancient Order of Melchizedek carries on the tradition of protecting this secret. Melchizedek is the first high priest of the Judeo-Christian Creator God and is mentioned in Genesis. He is believed to be the one who first taught the Ineffable Name of God to Abraham, who then passed it on. Melchizedek also gave Abraham communion — a “sacrifice” of bread and wine in the Name of that same God. See more about Melchizedek below.

Even in our first set Mystery School lessons we touch upon how to take steps toward “hearing” the Ineffable Name. Come to think of it, we talk about taking steps both literally and figuratively!  We  teach new members an easy technique of walking-prayer and walking-chanting that facilitates the hearing / receiving of the Name.

More about Melchizedek:
The Book of Genesis tells us the enigmatic character Melchizedek was “the High Priest of El Elyon”. He served this mysterious God-of-the-Name, the same God-of-Abraham and when these two men met, Melchizedek gave the first communion bread and wine in the Bible (right in Genesis) and in the entire faith tradition.  When a bishop makes a priest the bishop says, “Thou art a priest forever after the Order of Melchizedek”, because vestiges of this ancient priesthood have managed to survive — just barely — right in the Roman Catholic Church! In some of the “heretic” lines of the priesthood, the actual secret of the Name has been passed down. Becoming ordained a priest (including ordination as a woman priest) involves receiving certain secret teachings passed on by your bishop, which s/he got from his/her bishop.

Other code names for HaShem (the Name) are:

Codes used in Speech:
Adonai (means “The Lord”)
Ado-Shem (a combination of Adonai and HaShem meaning “The Name of the Lord”)

Codes used in writing:
G-d (is a respectful way to type the word God by leaving out the vowel and using a dash in its place. Modern Jews do this in all articles, emails, written materials, etc.)

When Writing it In the Bible:
YHVH:  which gave rise to Yahweh, Jehovah
Elohim (kind of means “gods and goddesses”)
Amen (survived from very ancient times, going back to Egyptian pre-historical era)