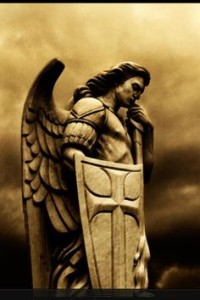 Today, October 13, is Templar Remembrance Day, the day the historical Templars were betrayed by the King of France and arrested en masse to be tried and executed as heretics. On that fateful day in 1307 it also happened to be Friday, and this is the origin of the unlucky Friday the 13th.

Just posted a link with pictures to our New Order of the Knights Templar Facebook page.

If you don’t have Facebook, you can see the pictures and read the article here on Wikipedia.

On this day — October the 13th — in 1307 the Knights Templar members were declared heretics and rounded up en masse to be burned at the stake. It happened on a Friday the 13th and is the origin of that day’s unluckiness, say historians.

Our New Order of the Knights Templar has observed this day for a couple of decades now by wearing black and fasting. In this way we honor our Templars of the past and connect with them in the present.

Light fasting is okay for those of you whose health conditions prevent full fasting.

The original mission of our Templar brothers and sisters of the past was to protect Christian pilgrims from Muslim attack as they traveled to worship at sacred sites.  Millions of Muslims travel to Mecca each year, but about a thousand years ago, tens of thousands of Christian devotees would make pilgrimages to visit Jerusalem and other sites holy to their religion. The muslims in charge didn’t want them coming, so they gave their soldiers standing orders to murder Christian visitors on site — after robbing them and sometimes worse.  The Templars were founded approximately a thousand years ago to stop these attacks and protect the Christian devotee pilgrims. They ended up in many a pitched battle with Muslim armies.

If a Templar were caught he would be automatically beheaded rather than offered the option to convert to Islam. Templars were not given the “traditional” option to convert to Islam because the Muslims knew they would never renounce their faith, even to avoid beheading.  Every year since 1999 I post to our Templar members on YahooGroups about Templar Remembrance Day, how we observe it with fasting and wearing black,  and mention this beheading thing.  I looked at last year’s post. My words are almost identical.  Last year I mentioned forced conversions of Christians in Syria and Egypt. I had no idea that this year we would ALL know what beheading was like.  Who knew that vile practice would be revived again by the dark side of Islam?  Of course they behead their own “criminals” in Saudi Arabia in a regular gruesome way (Saudi citizens are so oppressed), but this Muslims vs. the West beheading crap has not been seen for centuries.

Last year I also said this: The enemy is on the rise, so let us not forget today, our special Templar-Veterans Day.  It is believed that those Templar “veterans” of the past rise up whenever religious minorities of the West (especially Christians and Jews) are under attack.

Join with your fellow Templars of the present in wearing black and fasting today. Renew your vow to protect religious minorities.

Oct 4 – St. Francis of Assisi Day, one of the most “pagan” of the Christian saints, he coined terms “brother sun, sister moon”, and honored the covenant between humans and the animal kingdom. His mother is rumored to have been a closet Cathar heretic.

As we have done every year since 2002, please join Mystery School initiates and especially our Templar spiritual-warriors, in observing this day of remembrance.  All you need is a candle and a bell — or a glass with a spoon to substitute for the latter.
From our Mystery School’s holy days of the year calendar:

Strike a bell one time at the exact moment of 8:46 a.m. Eastern Time when the first plane hit Tower One, the North Tower in NYC.  If you don’t have a bell, you can strike a glass with a spoon.  The ringing sound — called a tolling — has long been used to remember souls of the dead.  You may also wish to toll at the following significant times (all Eastern Daylight Time):

Light a taper or small votive candle for each Sept 11 victim you knew by name, or knew of — such as a friend of a friend, distant acquaintance, or any victim you felt emotionally connected to such as someone from your home-town, alma mater, etc. You may also toll your bell for each name you know. If you didn’t know any of the victims by name, that’s fine, just perform the rest of the ritual as follows.

Next light a column candle to symbolize all the victims. If you have one of those fat round column candles, they serve as a good representation for all victims. Red is a good candle color for remembrance. Multi-wicked column candles are especially appropriate because they represent humanity or large groups of people.  The three-wick candles symbolize body, mind and soul, the three aspects of human beings.

After you light the candle or candles, hold each one up first toward New York City (where the first deaths occurred), then toward Washington DC, and finally toward southwestern Pennsylvania near the town of Shanksville.  You may need a map to help you determine which direction these places are from your specific geographic location.  Say in each direction, “Ignis Vitae Flagra In Aeturnum” or its English equivalent, “(May) this light-of-life burn in eternity.”  Then place the candle with reverence in a window or on your altar or other special spot.  Finish with a bell-tolling of three.  If you want to go deeper into remembrance, you can look up the list of over 3000 victims and recite their names.  Children of the victims did this recitation of names in 2002 and 2003, taking several hours to speak them all.

Keep in mind that in some places in the world today, as was done in Britain in 2003, there are groups celebrating September 11 as a sick kind of “defeat” or victory over the West.  They honor the 19 hijackers, calling them the “Magnificent 19,” praising them with huge rallies and celebrations while screaming promises of future attacks against Americans, British, Christian and Jewish peoples.

You may wish to contemplate the Dalai Lama’s advice to Americans on Sept 11, 2003 as follows:

The Tibetan Buddhist leader, who in 2003 came on a five-city, 20-day tour of the United States timed to coincide with the Sept. 11 anniversary, called on Americans to channel their lingering grief “into a source of inner strength.”

“Big, unthinkable tragedies happen,” he said. “Now, instead of keeping that and developing hatred or sense of revenge, instead of that, think long-term. The negative event, try to transform into a source of inner strength.”

Longest day of the year, a day most chosen to get married. This is the holy day opposite earth’s orbit from Christmas, the solar “birth” holidays. Luckily this is not a solar “death” holiday, although some in the “Dark Side” of the spiritual world do think of this day as a “death of god” day, the idiots. Never will understand the hardcore darkside — as if they would survive if the sun didn’t?!

Look at all the Goddesses connected to the Summer Solstice holiday. Some of them are from homelands in the news today. Iraq is certainly in the news currently, as is Syria. We have Ishtar, the Babylonian and Syrian goddess who gave her name to Easter, and whose birthday is considered Summer Solstice.  Brazil and the World Cup are also in the news, and is represented by Yemaya, the Brazilian goddess honored on Summer Solstice.

Scroll on down to see the ancient Egyptian holiday, Roman holiday (this was Hera’s Day!), and even Native American, ancient Hindu, and Druid holidays. This is quite a day worldwide and has been for millennia.

June 21:  Summer Solstice (Click for more info on this ancient holiday)  Here are all the deities — many Sacred Feminine ones — connected to this holy day through the ages.

– Day of Cerridwen and her Cauldron (English/Welsh)

– Day of Aine of Knockaine (Irish)

See also notes here about June Solstice holidays, including the other days coming after it.

June 23: Celtic Day of the Green Man – In honor of Herne, Cernernos, Lugh.

June 24:  TEMPLAR HOLY DAY. In the Roman calendar this day was thought to be Summer Solstice.  The Church renamed this pagan holiday to St. John the Baptist Day. Templars revered it highly.  On Jun 24, 1314 a mysterious band of knights joined Robert the Bruce of Scotland on the battlefield making his victory at Bannockburn possible.  These knights could only have been the a troop of disbanded and now in-hiding Templars who had fled to western Scotland.  St. John’s day was used by Freemasons in 1717 to found the first public (non-Scottish) Order of Freemasonry in London.  Masonic teachings are said to descend from the esoteric Christianity of Templarism.  St. John the Baptizer was beheaded because he wouldn’t give in and sacrifice his principles.  This is a Templar ideal, as is the constancy and regularity — order out of chaos — of the solstices and equinoxes.  So for both reasons, Christian and “pagan,” we observe this day. See also notes here.

– Feast of St. John the Baptist

– Burning of the Lamps at Sais (Egyptian)